An opportunity to go walking on Dartmoor is rarely passed up when it is offered, yesterday morning was no exception, so just after 9am, I am heading to a well photographed part of the moor, Windy Post.

Also known as Beckamoor cross or Windy stone, the stone is thought to have been placed here in the 16th century, however there are other schools of thought that suggest otherwise.
The cross is well known for it’s slight leaning, probably from the Dartmoor ponies that have seen it as a convenient scratching post.

The waterway flowing alongside the cross is the Grimstone and Sortridge leat, a handy watering hole for the ponies and sheep that graze the area.

There seemed to be a lot more Dartmoor ponies in the area today, also a good few foals shadowing mum, one or two curious ones very keen to introduce themselves, some not quite so confident.

While the day was not particularly sunny, it was very humid, I was thankful I had taken a bigger water bottle for today’s amble, as usual I was quite happy just to sit on a rock and take in the scenery, Dartmoor never fails to fill the senses with pleasure.

After taking the usual long exposure shots, it was a joy to watch the equine residents come to the leat to take on water, the moody skies providing the perfect backdrop. 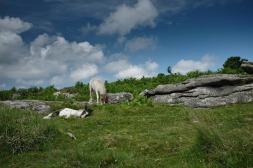 Of course, I came back with the usual large shipment of photos, the above are my pick of the bunch.